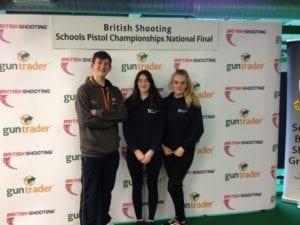 The 2018/19 British Shooting Schools Pistol Championships (BSSPC) reached its climax this month with the national final taking place at Stoke Mandeville Stadium, Buckinghamshire, and we were delighted to have had three pupils competing.

Over this year’s BSSPC season, 608 athletes representing 315 schools competed in seven regional events across England, Scotland and Wales with the best air pistol shooters going forward to the final. The Rookwood Senior Team comprising Aggie, Connie and Alex qualified after competing at the South East Championships.

The format at the final was slightly different from previous competitions as competitors used laser targets and equipment which allowed them to view a screen at their firing point to see how they were getting on. After a warm up shoot each individual had 20 competition shots to take in their own time within a 20 minute time period.

During the event each member of our team shot well with Alex achieving a personal best. Overall, the team finished in a very respectable 5th place in the Senior Team competition against some very hot competition including some on the British Shooting and British Pentathlon talent pathways.

Congratulations Aggie, Connie and Alex we are extremely proud of your great team performance and how hard you worked to reach the national final.